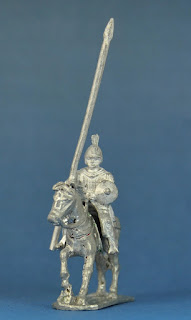 This figure is the Byzantine Heavy Cavalyman that first appeared in the Miniature Figurines 72/73 catalogue as PBC 146. Or at least I believe it is - it's quite a small figure compared to others in the range, and I've never seen the 'S' range Byzantine Heavy Cavalryman with Kontos (ABC 2s) which is the only other possibility. However, it's a dead ringer for the illustration in the AEIR book, so I'm pretty sure we have it correct.

Both PB ranges were based on Phil Barker's books Armies of the Macedonian and Punic Wars and The Armies and Enemies of Imperial Rome. This figure appears to be taken from illustration 46 in the first edition of AEIR.

The rider represents a horsemen of the sixth century and is armed with the lance-like kontos and a bow. At least the front ranks of cavalrymen would have ridden armoured horses.

I have mounted this chap onto a PBH 221 and  therefore we have the classic 'double saddlecloth' that is a common feature of this range. The code is stamped onto the upper part of the base in the usual style. 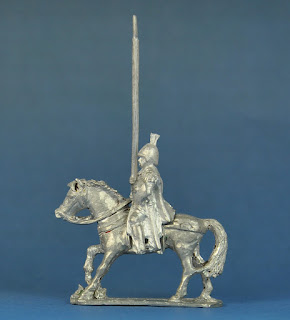 Although a reasonably popular army at the time, I think Minifigs lost out to Hinchliffe, who made a larger range of troop types and whose models were somewhat larger by a head. I've seen many Hinchliffe Byzantine armies, and they turn up second hand quite regularly, but Minifigs versions are pretty scarce. A case of different sculpting styles suiting different armies perhaps. 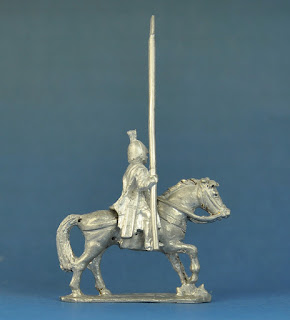